“The future of publishing in Canada has arrived, born into the world by publishing houses with names like Get to the Point...” --Canadian Bookseller

SMARTEN UP! & Get To The Pointis the publisher of handmade art books, chapbooks of award-winning poetry, accutely observant/innovative fiction, and CDs of music and poems by community activists. Mecca Normal's guitar player, David Lester, is the publisher. The underground rock duo's singer, Jean Smith, is the editor.

"Mecca Normal, Vancouver's pioneering anarchist-feminist-literary-punk-rock duo, has been sending chills up spectators' spines for a full 15 years now, with breaks to write novels and other un-rock-starry preoccupations." —GLOBE AND MAIL (Canada)

Smarten UP! Records began as a How to Change the World Publication (1984) and turned into a record label to release Mecca Normal's first LP (1986), later re-released by K Records. David Lester started Get to the Point Editions to publish Jean Smith's first novel I Can Hear Me Fine.
2010
MUSIC: iTunes re-releases on Smarten UP! 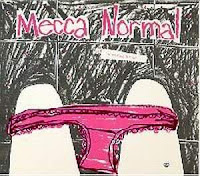 Horde of Two
Guitar and Bass Actions
David Lester & Wendy AtkinsonListen to Horde of Two on MySpace
Recording this album begins in the dead of winter with a TV monitor set up in the living room of Wendy's apartment. The video is cued to a murder scene in Alfred Hitchcock's film Blackmail. Picking up their instruments -- guitar and bass -- Wendy presses the record button on the 4-track and their music unfolded in a collaborative response to the tension on screen, creating lush tendrils of bass hanging from wrought iron balconies of guitar.

Pink Noise
by Wendy Atkinson
Available online from K Records
Wendy's second solo bass-only album, continues her exploration of the low-end world of electric, acoustic and double basses. Just like her first album she wrote and mixed this one on an analog 4-track. Since its release in January 2007 Pink Noise has charted on college radio stations across North America and been reviewed by publications in Canada, US, China and Germany.Wendy Atkinson on MySpace

Many of our book covers are individually made, featuring: cut accents, hand printing, stitching and silkscreen. For the most part, we have very limited distribution. Some items are SOLD OUT. Prices include postage to the U.S. and Canada (the difference on U.S. funds covers extra postage from Canada to the U.S.).
Check, Postal Money Order or hidden cash, payable to
Get To The Point
#304-1320 Salsbury Dr.
Vancouver, BC
V5L 4B3
Canada

Jean Smith
-- "Two Stories"
-- "I Can Hear Me Fine" -- David's account of publishing Jean's first novel.
-- "The Family Swan" -- a chapbook of lyrics and poems with a hand-printed cover.

back coverFamily Swan and other songs
by Jean Smith
isbn 0-9697112-5-5
$10
Smith ascends to a new level of willingness to reveal accounts of family tension giving readers a new vantage point to view their own history from. Specific and personal, the adult does the remembering. Family Swan is powerful – anger, pain and funny recollections are allowed to surface. Most of these pieces are on “The Family Swan” the new Mecca Normal CD, out August 20, 2002 on Kill Rock Stars. Jean hand printed her lino-cut cover at Community Print in Olympia, Washington with the asisstance of Nikki McClure.

I Can Hear Me Fine
by Jean Smith (1993, distributed by Arsenal Pulp Press)
isbn 0-9697112-0-4
$10
The first of Smith’s two published books of innovative fiction. This is the first book Get To The Point published; a poetic novel of sublime beauty from the singer from Mecca Normal.
“A literary jigsaw puzzle, one that might have been designed by David Lynch and Sylvia Plath.”—BC BOOKWORLD
“Mecca Normal band member Smith has proven to be as good a writer as she is a musician, one of several non-conflicting juxtapositions in her life and work.” (named one of Vancouver`s top 50 writers `99)—VANCOUVER MAGAZINE

Black Milk
by Catherine Owen
“One of the top 5 poetry chapbooks in Canada.”—Literary Network (Toronto)
$14 SOLD OUT
A young mother’s x-ray vision of her new reality. Owen was a finalist for the Gerald Lampert Award. The book cover, silkscreen on black vinyl, is handmade by Jean Smith.
POETRY:

Out of the Missed
by David Pritchett
isbn 0-9697112-3-9
$10
Pritchett, a longshoreman from Vancouver, swings a crane-load of ideas on love, capitalism and global peril. Along with Norman Nawrocki and Mecca Normal, he is an original member of the Black Wedge Poetry Tour (1986).

Keys To Kingdoms
by Bud Osborn
Winner of the City of Vancouver Book Award
isbn 0-9697112-1-2
$10
Poems by a community activist from Canada’s poorest neighbourhood.

Afternoon Descends To Night
by David Lester
$10 SOLD OUT
“A collection of funny, surreal illustrations. Lester’s insights make him a kind of alterna-editorialist.” —MAGNET MAGAZINE

I talk so fast that my words lose context and meaning
by David Lester
$10 SOLD OUT
ISBN 0-9697112-4-7
In conjunction with Mecca Normal performances, a selection of drawings from “I talk so fast…” will be shown in art gallery locations throughout 2002.

The Gruesome Acts of Capitalism
by Public Record -- original, limited edition
$10
David Lester’s chapbook has been on tour in the Book Mobile (2002), and its design is featured in Zines (Booth Clibborn Editions, UK) -- a large format book about fanzines. Gruesome is also available from buyolympia.com

I’ve Fallen In Love With You
by Wendy Atkinson & David Lester
$25 limited edition
A lovers’ scrapbook filled with poetry, photos and paintings.
“It gets no more complicated, and no less lovely than that.”—BROKEN PENCIL

What the Wind Brings
by Chad Norman
$10 SOLD OUT
published for a Doctors Without Borders benefit
A moving collaboration of poems and drawings between father and daughter in the quest for peace by a winner of the Gwendolyn MacEwan Memorial Poetry Award.

Give Me A Call
by Duane Crone
Smarten Up! Records
$10
Duane Crone was the busker in front of Vancouver's Commercial Drive liquor store for 15 years. He performed his original songs, lifting spirits on the Drive, 6 days a weeks from 10 a.m. till closing. Produced by Jean Smith.
The title track "Give Me A Call" is in the independent film "Adonde Fue Juan Jose?" -- the song plays on the jukebox of a country and western bar. Dobro was added to the mix by Steve Boatright. The soundtrack CD, "Pajaros de Otro Canto" (The Free Bird Agreement), will be out on Chee Wee Records.Duane Crone on MySpace


Re-leased by K Records -- you can download the five Mecca Normal CDs on K at http://www.krecs.com/Shop/product_info.php?products_id=3115